Skin bleaching or skin whitening is not a new concept.

Back in the Elizabethan times women and men strived to achieve a pale white skin complexion. This was considered to be a sign of beauty and also of social standing. Those who could afford to applied Ceruse – a paste made from vinegar and white lead – to their face, neck and chest.

For woman it was also fashionable to have rouge cheeks and crimson lips.  They would use dyes from plant roots and animals on their cheeks but the lips were reddened further by with a pigment made from red mercury sulfide. Mercury was also used to wash the face, acting like a chemical peel to make the skin soft and fresh.

Of course, we now know the about effects of lead and mercury poisoning on the body, so it is no surprise that these practices caused serious skin damage that included skin blemishes and acne but also a thinning of the outer skin layer. In more severe cases the skin might even turn a blue grey colour.

Despite the risks, these dangerous ingredients were used in beauty treatments well into the 18th century and mercury can still be found in skin whitening creams and soaps today.

While a whiter skin complexion is still considered desirable in some cultures, more and more woman are seeking skin whitening treatments to treat skin problems associated with hyperpigmentation. Uneven skin tones and areas of hyperpigmentation can occur as a result of sun damage, skin irritation, hormonal imbalances or birth control pills.

Skin whitening or skin lightening creams can be used to treat a range of problems including dark spots, acne scarring, freckles and melasma but be care should be taken when choosing a product. Many skin lighteners still contain chemicals that pose serious health risks if used for prolonged periods.

How Do Skin Whiteners Work?

Skin whitening creams contain ingredients that act to slow the production of melanin in the skin’s outer layer.

Melanin is a brown pigment produced in the melanocytes in the skin. Melanin is the body’s natural protection against the harmful effects of UV rays, however, an over production of melanin (hyperpigmentation) can cause uneven skin tones and other skin disorders.

Skin bleaching agents act to reduce the action of the enzyme, tyrosinase, which controls the rate of melanin production in the skin.

Products that contain effective ingredients can help to treat the problems associated with hyperpigmentation, however, chemical-based skin whiteners can  can be potentially dangerous and carries the significant health risks with extended use.

What Skin Whitening Ingredients Should We Avoid?

Chemicals traditionally used in skin whitening products can include hydroquinine, mercury and steroids. While the use of these chemicals has been banned in some countries, ingredients like hydroquinine may still be prescribed by physicians.

The biggest danger of exposing the skin and body to these toxic chemicals is that, over time, they can produce adverse side effects and serious health concerns including skin discoloration, malfunctions of the nervous system and internal organs and an increased risk of cancer.

Hydroquinone [C6H4(OH)2] is a toxic chemical that is used in black and white film processing, manufacturing rubber and is found in some hair dyes. Hydroquinine is used in skin lightening creams and lotions because it is an effective bleaching agent, slowing the production of the tyrosinase enzyme and reducing the amount of melanin formed.

While we do not know the full extent of the health risks hydroquinone poses, it is considered to be cytotoxic (toxic to cells), mutagenic and carcinogenic (cancer causing). Hydroquinine is thought to increase the risk of complications such as thyroid disorders, liver disease and adrenal dysfunction. It has been banned for sale as a skin lightener in Europe, Japan, and Australia and many groups are calling for the FDA to ban this chemical in the US.

Common side effects reported from the use of hydroquinine creams include skin rashes, burning skin irritation, excessive redness and a dryness or cracking of the skin.

If used for extended periods of time, hydroquinone can sometimes induce a condition known as “ochronosis.” People with ochronosis can show a blue-black darkening in certain areas of the skin.

Like other pigment-reducing complexes, hydroquinone can make your skin more susceptible to the sun’s UV rays. This can lead to serious sunburn and an increased risk of certain types of skin cancer.

In August 2013 the Food and Drug Administration (FDA) issued a warning to consumers advising them not to use skin creams, beauty soaps or lotions that might contain mercury due to the dangers of mercury poisoning.  The FDA first banned the use of mercury in skin-bleaching and lightening products back in 1990 but the regulatory office has since found that mercury was being used as an ingredient in some products that were manufactured abroad and sold illegally in the United States.

Mercury is a toxic chemical that is readily absorbed into the body but it is not easily removed. When mercury is used for skin whitening the initial side effects can include skin rashes, skin discoloration and scarring. Long term exposure to mercury can have more serious health consequences.

The World Health Organisation advises that using mercury on a long term basis can damage the kidneys and the nervous system. It can also cause depression or psychosis and interfere with the development of the brain in unborn children and very young children.

The FDA recommends that you read the label of any skin lightening creams you use. Products containing mercury will have the words “mercury,” “mercurous chloride”, “mercuric,” “mercurio,” or “calomel.”  If there is no label or list of ingredients do not use that product.

Unfortunately, many skin-lightening creams contain illegal compounds which can include high-dose steroids. Although steroids can be useful in treating inflammation of the skin caused by diseases such as eczema, psoriasis or dermatitis, they were never intended for skin lightening use.

When steroids are prescribed this take place under the supervision of a skin specialist and the usage is generally minimised to a few short weeks.

While topical corticosteroids can appear to lighten the skin very quickly, this is because they act as “vaso-constrictors”. This means the blood vessels in the area treated will become constricted (narrow) and the flow of blood will be slowed, giving the skin a whiter appearance.

Steroids can also slow the process of cell regeneration so less melanocytes are formed, leading to a decline in melanin production. The negative side of slowing the skin’s natural cell renewal is that the epidermis (outer skin layer) can becomes thinner and many people complain of the appearance of green veins in the skin.

Unmonitored use of high-dose steroids can lead to many problems. The thinning effect on the skin can increase the risk of physical damage to the skin. The skin can become more susceptible to chemical and environmental factors and there will be an increased risk of sun damage and additional pigmentation problems.

The high doses of steroids found in the illegal skin whitening creams can also interfere with the body’s hormone levels and, in extreme cases, can result in disorders such as Cushings syndrome which affects the adrenal gland.

Are There Natural Alternatives For Skin Whitening?

Since many chemical-based skin lighteners have now been found to have serious health concerns, researchers and skin care companies have been prompted to look for safer alternatives for their consumers which is good news for us!

Extensive testing of many plant species has lead to the discovery of a number of all natural lightening ingredients that act to supress melanin production, in the same way as their chemical-based counterparts, but they are non-toxic and do not carry the risk of serious side effects.

Meladerm Pigment Reducing Complex (developed by Civant Skincare) is a good example of a plant-based lightening cream that utilises a number of these natural “pigment reducers” – ingredients that are clinically proven to inhibit melanin production in the skin. Natural skin lighteners have been found to achieve very good results without the risk of serious side effects and offer a great alternative for people who want to avoid chemical-based products. 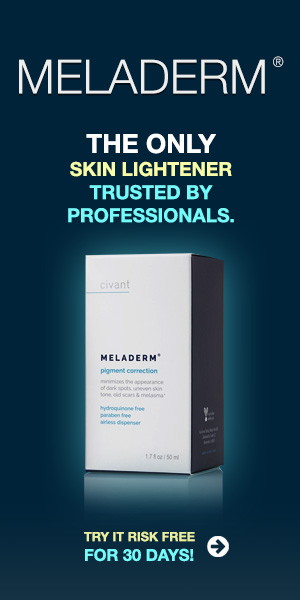